When a child is given a little leeway, he will at once shout, ‘I want to do it!’ But in our schools, which have an environment adapted to children’s needs, they say, ‘Help me to do it alone.'”—The Secret of Childhood  Dr. Montessori

What is a Montessori Education?

Montessori Education was developed by an Italian physician – Dr Maria Montessori in the early 20th century. As the first female physician in Italy she worked with some of the most disadvantaged youth in Rome’s slums at the time. She used her training and observations as a medical doctor to design a school that helped children to grow and develop naturally and in tune with their environment.

She took away all of the preconceived notions of what a school should look luke and designed a classroom and materials based on what she observed about children in their natural state. The schools created based on her observations became known as Montessori Schools.

Here are 10 principles of a Montessori School: 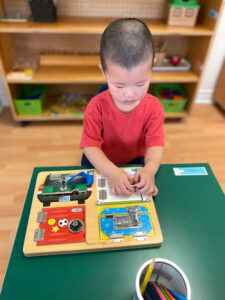 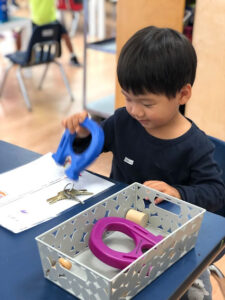 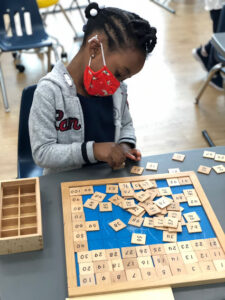 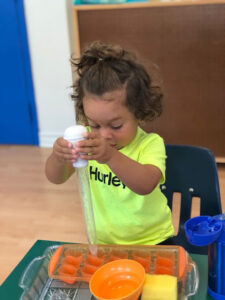 What is Montessori?
10 key principles all parents should know

With over 4,000 Montessori schools in the US now, “Montessori” is becoming a household word. But while it’s pretty well known as an alternative form of education, there is often still an air of mystery around it. It can be hard to describe, even for those whose children attend a Montessori school.

So what is Montessori?

The Montessori method of education was developed by Maria Montessori, the first female Italian doctor, in the early 20th century. She used her training as a scientist and doctor to carefully observe children and designed a school meant to appeal to their nature, rather than fight it.

For example, if children like to move, why not design a school that lets them move, rather than constantly fighting to keep them in their seats? This is the type of question she asked.

She took away all of the preconceived notions of what a school should look like and designed the classroom and materials based on what she observed about children in their natural state. The schools created based on her observations became known as Montessori schools.

Here are 10 foundational principles of Montessori education to give you a better idea of what Montessori is, and whether it may be right for your children.

Children in Montessori schools learn by working with specially designed materials. Rather than memorizing math facts, they begin by counting and adding concrete materials. They use little objects and a set of wooden letters known as the movable alphabet to learn to read and write. Maria Montessori observed that children need to move and learn through experiences, rather than through sitting and listening to a teacher.

Montessori classrooms include mixed ages and mixed skill-levels, generally divided into three year groups (e.g., 3-6 year olds, 6-9 year olds). Peer learning is encouraged as the little ones learn from observing their older friends and the older children solidify their knowledge and gain valuable leadership skills through giving lessons to the younger children.

While Montessori schools are most common for younger children, Montessori middle schools and high schools exist as well.

All authentic Montessori schools have long, uninterrupted work periods (generally 2-3 hours depending on age). Rather than having 30 minutes for math and then 30 minutes for language, children have a long morning and afternoon work period in one classroom that includes all of the subjects. This long time period allows children to engage with the materials deeply and reach intense concentration.

In addition to math, language, and science, Montessori schools include two other academic areas: practical life and sensorial.

Sensorial is the education of the senses, and is most prevalent in classrooms for young children. Montessori believed that children learn through their senses and there are materials specifically designed to help them refine their sense of smell, hearing, etc.

5. Role of the teacher

A Montessori teacher is sometimes referred to as a guide, rather than a teacher, and this reflects her non-traditional role.

A Montessori teacher’s job is to observe the children and introduce them to the academic materials at just the right time. She is often hard to find in the classroom, as she is generally working one-on-one with a child, rather than standing at the front of the room talking to the whole group. Maria Montessori saw the role of the teacher as providing children with tools for learning, rather than pouring knowledge and facts into them.

The work in a Montessori school is child-directed. A teacher gives a child a lesson on a material he hasn’t used before, but the child can then independently choose to work on it when he pleases.

Children in a Montessori classroom choose where to sit and what to work on, with guidance from a teacher. A child will not be allowed to dance around the room and distract his friends or only draw all day, but he can choose whether to work on math or language, or whether to sit at a table or on the floor.

Montessori focuses on educating the whole child, including physical, spiritual, social, mental and emotional education. This means that you might find a Montessori 3-year-old carefully walking on a line while carrying a glass of water, learning to control his body and his movements. You might find a child meditating or doing yoga while you see another practicing subtraction nearby. Each of these components is considered equally important.

If a Montessori class has 25 different students, each of those 25 will be at a different academic level that is observed and tracked by the teacher. Rather than giving group lessons, Montessori teachers give one-on-one lessons to each student depending on his specific level and needs.

This is possible because the children largely work independently, spending much of the day practicing and perfecting work they have already been given a lesson on.

Montessori classrooms are referred to as a “prepared environment.” This means that they are designed with everything the children need to explore and learn independently. They are filled with low shelves and beautiful materials to entice children to want to learn and work.

Montessori teachers observe the children and decide what work to place on the shelves to meet the children’s interests and needs at the time.

Montessori classrooms are also far more minimalist than traditional classrooms, particularly for young children. They are full of muted colors and natural light to foster concentration. Everything in the classroom has a specific spot on a shelf where it belongs and the work is carefully organized to help children develop a sense of order.

Maria Montessori lived during a time of world wars and global upheaval. Perhaps for this reason, she placed great emphasis on peace education.

She believed that the future of the world depended on us teaching our children the importance of peace and this belief is still reflected in Montessori schools today. There is a great emphasis on community, both the classroom community and the wider global community we’re a part of. Children learn about the world and also learn tools for calming themselves and conducting peaceful conflict resolution. 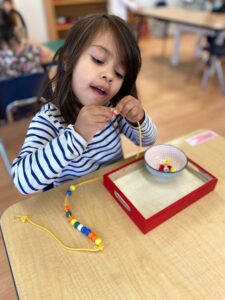 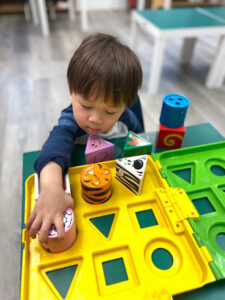 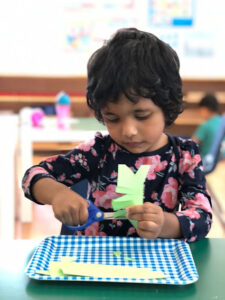 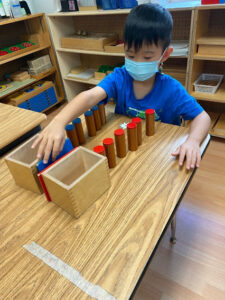